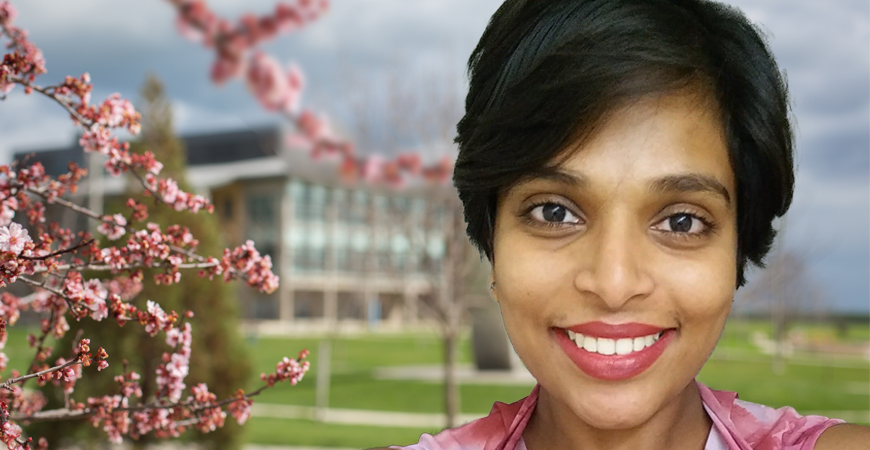 Ritwika Vallomparambath PanikkasserySugasree's enthusiasm for science has led her to some interesting collaborations.

Most people wouldn’t think physics has anything to do with baby babble and human language development.

The graduate student, who prefers to go by her first name, specializes in computational biophysics but likes to think of herself as a complexity scientist. That has led her to several collaborations in a diverse array of subjects, from bacterial motion in response to light and the evolution of human language to the patterns discernable in the multiple behaviors of predators and their effects on prey populations.

“When you strip them all down, it’s just statistical physics,” she said. “I love what I do and that I can study so many different topics. I just think science is cool.”

Ritwika and her faculty adviser Professor Ajay Gopinathan, along with cognitive science Professor Chris Kello, former UC Merced Professor Anne Warlaumont and others collaborated on a study about infants using foraging behaviors as part of their linguistic development.

“Babies interact with their adult caregivers, and that shapes how they learn language,” Ritwika said. “...but we don’t know much about the exploratory dynamics in the vocal domain over a day.”

The researchers recorded babies at 3, 6, and 9 months old. They used software to identify speech-related sounds the infants made, such as babbling, and also collected data from adult caregivers. The team took the mean pitch and mean amplitude (loudness) of sounds both from adults and infants, measured the distance in the pitch and amplitude of those vocalizations and the inter-vocalization time intervals.

Using that data, they created a dimensional landscape to plot the infants and caregivers’ vocal interactions. The findings suggested that some sounds by infants and adults were more likely to receive responses than other types. When infants used a higher pitch, adults were less likely to respond. But when infants were louder, adults were more prone to respond. Meanwhile, infants were more inclined to respond to adults if the adults spoke louder or in a higher pitch. The results also suggest that infants’ vocalizations became more frequent when adults responded.

“Our hypothesis was that vocal responses from adults would serve as rewards for infants,” Ritwika said.

Data analysis indicates that babies use behaviors typical of foragers to search within the space of sounds for those rewards. They are testing sounds to see what works.

She was scheduled to present the research at the 2020 American Physics Society’s March meeting in Denver, but her trip was canceled because of the COVID-19 pandemic. But the outbreak hasn’t put a damper on her work.

“This is exactly the kind of wacky science I’m into,” she said.

“Developing projects with Ritwika has been great fun,” said paleoecology Professor Justin Yeakel, her co-adviser. “She understands how to find and explore connections between seemingly disconnected ideas and subjects, and this playful creativity often pays off with exciting results.”

Ritwika, 27, came to Merced from Kerala, India, specifically to study with Gopinathan, the chair of the Department of Physics. His father was one of her professors at one of the Indian Institutes of Science Education and Research (IISERs), where she completed an integrated bachelor’s-master’s degree. The focus of IISERs is to prepare undergrads for careers in research, which is exactly what she wants to do.

“Ritwika is academically one of our very strongest students and displays a remarkable intellectual breadth in her research,” Gopinathan said. “She is hard-working, self-driven, highly collaborative and has a knack for connecting across traditional disciplinary boundaries, which bodes well for her future.”