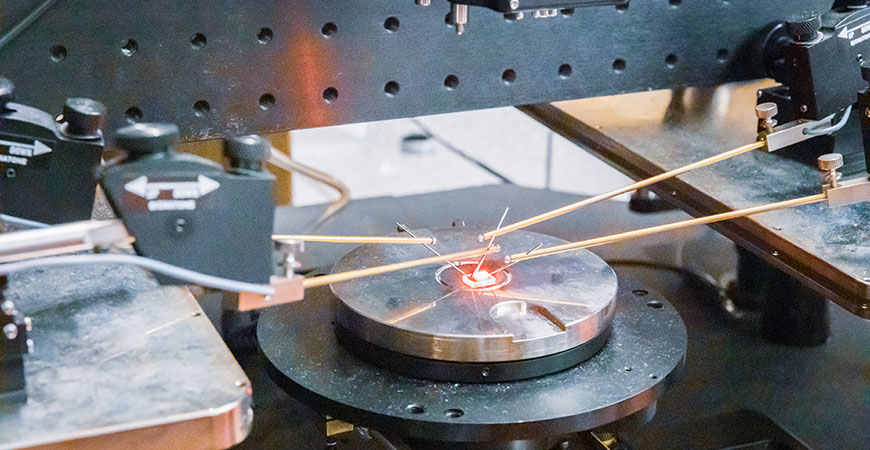 Electrospraying could be the answer to producing solar cells in space.

Professors Sayantani Ghosh and David Strubbe and their students in the Department of Physics are working on a NASA initiative to fabricate solar cells in space and turn sunlight into electricity.

“One of the big challenges with solar cells is that they are heavy, and NASA has been building them on Earth and then taking them into space,” Ghosh said.

Ghosh and her lab work with perovskites — hybrid organic-inorganic crystals used as the light-harvesting active layer in solar cells. They are cheaper and easier to produce than the prevalent silicon-based solar products. However, the crystals are vulnerable to moisture and oxygen, said William Delmas, a third-year graduate student from Madera, who works with Ghosh.

Ghosh’s lab developed a simple, efficient process for creating perovskite solar films called “electrospraying.” The method does not require gravity because it creates its own electric field and creates extremely smooth solar-energy-absorbing films. Now the researchers want to see if NASA can put it to use.

“There’s no moisture or oxygen in space,” Delmas said. “Also, with 1 liter of perovskite solution, we can make a football-field-sized sheet of solar absorbers in space — so if this works, we can have all the power we want in space, and the ability to make more.” 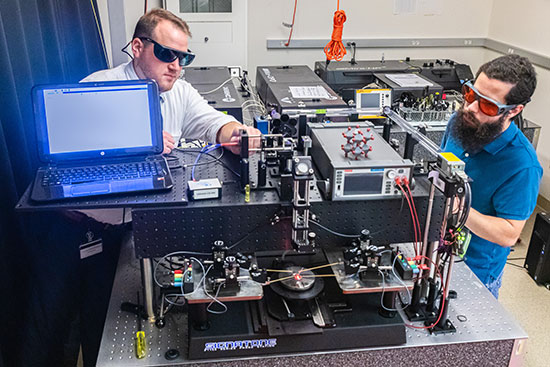 Ghosh wasn’t thinking about moon or Martian colonies or interstellar spaceships when her lab developed electrospraying. But Delmas recently returned from his second summer internship with NASA, where worked with NASA scientist Timothy Peshek at the John H. Glenn Research Center in Cleveland.

The NASA scientists invited UC Merced to apply to be part of their project after working with Ghosh and Delmas and the NASA-supported Merced nAnomaterials Center for Energy and Sensing (MACES).

“These materials are very interesting and have been part of an exciting time in the development of better solar cell materials,” Peshek said. “However, their usage for space applications is only now becoming apparent as an option to reduce power-generation costs. There is a lot more work to do before we can demonstrate their feasibility.” 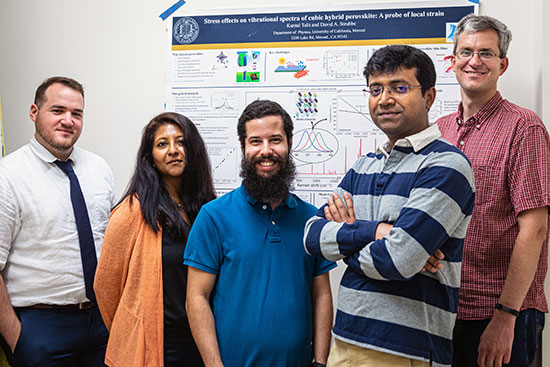 For the next year, Ghosh and her lab will create perovskite film products. But these materials have only been tested on Earth, Ghosh said. Perhaps as soon as next summer, they will be studied under a variety of conditions at NASA. One testing location could be the Glenn Research Center, where a large facility simulates the entire solar spectrum under the same conditions experienced at the International Space Station.

“When you’re in sunlight in space, it’s very hot, and when you’re not, it’s extremely cold, and the transition between the two is rapid,” Delmas said. “They will be able to test under all those conditions. It’s ridiculously cool and I am super excited to have them test our products.”

But will the solar films survive in space? Strubbe’s group will try to help answer that question using computer simulations. Strubbe, who is researching how sunlight affects perovskites and other silicon-alternative materials, will work on degradation issues with the films, including light and stress.

“We’re going to look at the atomic level to reveal what we can’t ordinarily observe,” he said.

Meanwhile, the two groups of students will get hands-on experience working on a real NASA project and strengthening the bond that has developed between the agency and the campus since MACES began four years ago.

“I had never thought of NASA as a career possibility because I thought you had to be doing aerospace to work there,” said Delmas, a physics Ph.D. candidate who focuses on semiconductors. “I had no idea they are doing all this diverse research to push science forward. The people there are amazing, and I would encourage other students to think about getting involved with MACES. It offers a lot of great opportunities.”