By the MIT News Office, the University of Basel News Office and UC Merced
June 6, 2022 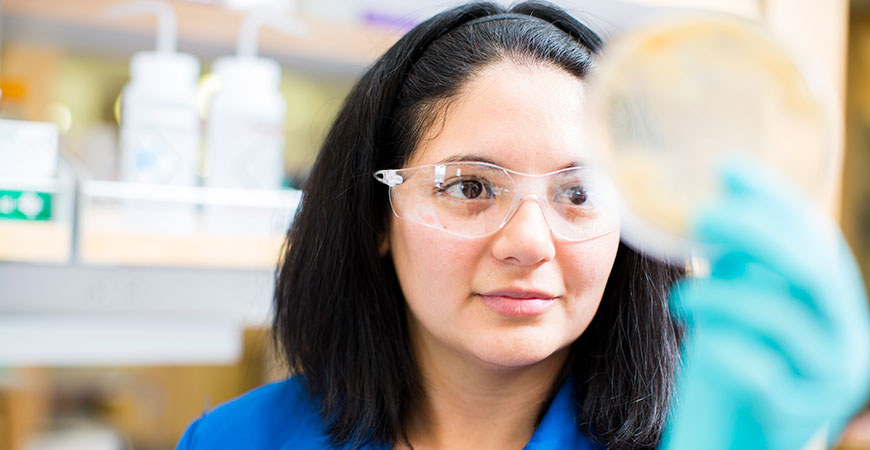 An international team of researchers, including Professor Clarissa Nobile from UC Merced, has discovered which component in mucus prevents a fungus most humans carry from turning destructive.

This research lays the foundation for a new class of antifungal medicines.

Candida albicans (C. albicans) is a fungus that colonizes the mucosal surfaces of most healthy humans. But most people don't notice it because of mucus, which keeps it in check. Under certain conditions, though, C. albicans can take on a harmful form and cause infection.

In its harmful form, C. albicans can cause conditions such as oral thrush, vaginal yeast infections or even a life-threatening systemic infection that affects the blood, heart and other parts of the body, with a fatality rate of approximately 40%. There are few antifungal drugs available, so these infections remain a challenge to treat.

Until recently, scientists didn't know what it was about mucus that kept the fungus from becoming a pathogen. In a new paper in Nature Chemical Biology, the researchers identify complex, specialized sugar molecules, or glycans, as the heroes.

Specific glycans can suppress “filamentation” of C. albicans as well as other virulence-related traits, which are hallmarks of infection.

“I am really excited about this new work because I think it has important implications for how we develop new antimicrobial therapies in the future,” Nobile said. “If we figure out how to therapeutically deliver or increase these protective mucin glycans into the human mucosal layer, we could potentially prevent and treat infections in humans by maintaining microorganisms in their commensal forms.”

Glycans are a major component of mucins, the gel-forming polymers that make up mucus. The team of experts in biochemistry, pharmaceutical science, surgery, and microbial infection and immunity, and Nobile, a microbiologist and molecular and cell biologist, had to synthesize glycans because they are difficult to isolate in their natural state.

Team member Rachel Hevey, a research associate in pharmaceutical sciences at the University of Basel in Switzerland, is part of only a small number of research groups worldwide developing methods to synthesize these complex molecules.

To test which of the several hundred glycans found in mucus interact with C. albicans, the researchers analyzed and compared the molecular composition of different mucus samples that suppressed filamentation.

Researcher Katharina Ribbeck, a biophysicist from MIT, lead of the study team, and together with the Nobile lab, tested and confirmed the effects of the glycans on C. albicans.

Combined with the team’s previous and ongoing work on other pathogens, the researchers are convinced that glycans may be the key to a novel class of antifungal drugs.

“The picture that is emerging is that mucus displays an extensive small-molecule library with lots of virulence inhibitors against all sorts of problematic pathogens, ready to be discovered and leveraged,” Ribbeck said.

The study identified more than 500 genes that are either up- or downregulated following exposure to mucin glycans.