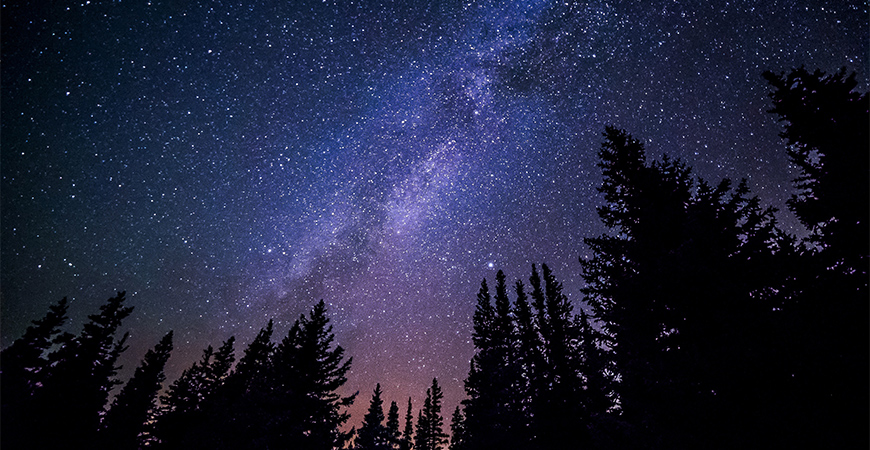 Students who want to help discover more about the universe are encouraged to sign up for new astrophysics classes.

UC Merced occupies just one small corner of the world. But through the research, teaching, experience, and connections of two new Department of Physics faculty members, students can access and begin to understand the universe.

Astrophysics professors Sarah Loebman and Anna Nierenberg joined last summer and fall, and have already launched a new introductory course in astrophysics open to students of all majors this spring.

Besides their focuses on observation, simulation and data analysis, they are enhancing students’ research experiences through Loebman’s membership in The Sloan Digital Sky Survey (SDSS), an ongoing, global effort to collect as much information as possible about the cosmos and Nierenberg’s access to space telescopes. Their students will also get to take advantage of the UC-led facilities such as Lick Observatory on Mount Hamilton near San Jose and the William M. Keck Observatory on Mauna Kea in Hawaii.

The University of California has some of the world’s best telescope facilities, and UC Merced is in a collaboration with UC Santa Cruz, which has one of the top astrophysics programs in the world. Bobcats will be able to take graduate classes through Santa Cruz and participate in telescope time around the globe in an observation room on the UC Merced campus, as well as be part of citizen-science projects.

“Our undergraduates will have unlimited access to SDSS-IV and SDSS-V data even before it becomes public,” Loebman said.

Her main research focuses on galaxy evolution, clustered star formation and chemo-dynamics in the local universe. She uses high-resolution galaxy simulations, survey data and big-data tools and techniques to connect the present-day motion of stars to the Milky Way’s dynamic past. She also leverages the elemental composition of stars to deduce where stars like our own Sun formed in the distant past. As a member of SDSS-V, Loebman is a part of several sky-mapping efforts to understand the Milky Way, black holes and gas in nearby galaxies.

“We want to know the evolutionary history of the Milky Way,” she said, “and understand the building blocks of the universe.”

Nierenberg, who came to UC Merced from a postdoctoral research position at NASA’s Jet Propulsion Lab (JPL), concentrates on star formation and the nature of dark matter . Dark matter is believed to account for about 85 percent of the matter in the universe and about a quarter of its total mass–energy density. One of the ways scientists know about dark matter is that stars at the farthest reaches of the galaxy rotate around the galactic center faster than they should, implying that there is “extra” matter exerting gravitational force.

She studies dark matter halos, which envelop whole galaxies. They are believed to be distributions of dark matter that extend far beyond what’s visible in a galaxy. Such halos have greater mass than other parts of the galaxies, and the halos might determine the dynamics of planets, stars and other galactic components. Studying these halos could lead to new information about galactic formation and evolution and the nature of dark matter.

“More than 80 percent of the matter in the universe is thought to be unknown particles — ones that are not part of the standard model,” she said. “Dark matter exists, it’s just some particles we have yet to understand and identify.”

This is an exciting time for astrophysics with terabytes of observational and simulation data newly accessible and petabytes available in the next 10 years, as well as new space telescopes and the first images of black holes.

“A lot of the recent developments are the result of cutting-edge data analysis, and we are very strong in that area,” department Chair and Professor Ajay Gopinathan said. “Building a computational and data-science-intensive astrophysics program therefore synergizes with existing strengths and positions UC Merced very well for future growth and impact. This represents an excellent investment on the part of the campus.”

Adding the astrophysics emphasis to the department’s three primary research areas — atomic, molecular, optical physics; hard condensed matter; and biophysics/soft matter — is part of the strategic growth plan, and Gopinathan predicts a significant increase in the number of physics majors and growth in the graduate program.

“Students have been asking for it,” he said. “Every year, we’ve had to turn down very strong graduate students who want to do astrophysics and we are now excited to be able to bring them to UC Merced.”

To help build the program, the department has assembled an astrophysics advisory board populated by astrophysicists from around the UC system. Board members have helped and are continuing to help recruit potential faculty and graduate students as well as sharing resources.

The plan is to offer more general education classes, but also to use the program to connect with the community through K-12 outreach, public lectures, stargazing nights and other events.

Loebman and Nierenberg both said they are excited to be part of building the new program and to work with the students at UC Merced.

“To accomplish what we are after takes a lot of computer science expertise — you’re sorting through and deriving meaning from large volumes of data,” Loebman said. “It will be an opportunity for students to learn new skill sets such as statistics and machine learning that will help them wherever they head in the future.”