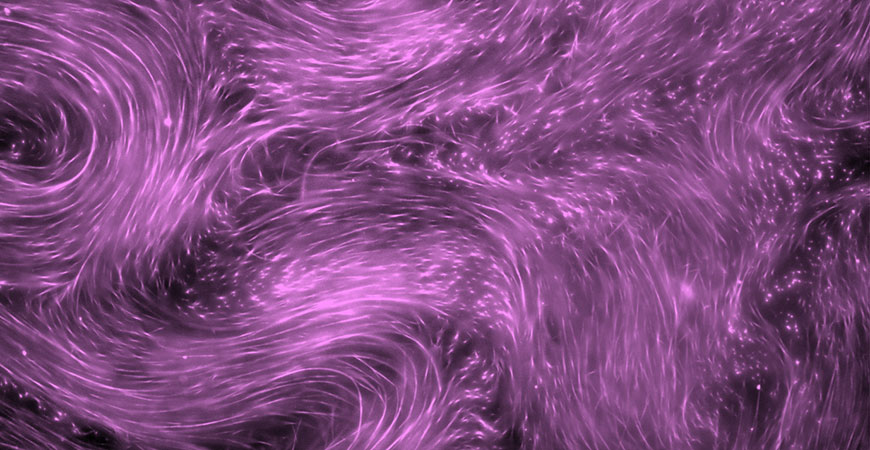 Flocks of starlings producing dazzling patterns across the sky are natural examples of active matter — groups of individual agents coming together to create collective dynamics.

In a study featured on last week’s cover of the journal Science, a team of researchers including a UC Merced theoretical physicist revealed new insights into what happens inside such active systems.

Active materials are substances that move and change forms using their own stored energy, not external forces. Active nematics, the focus of the new study, spontaneously flow like liquid when they are deformed, and deform themselves as they flow.

As the system evolves, the defects appear to come to life, growing and shrinking, creating lines, loops and new combinations as they meander through the system, enabling the active nematics to stir themselves, the researchers said.

Nematic describes a state of matter that emerges in the kind of liquid crystals widely used in smartphone and television displays. Though the cigar-shaped molecules in liquid crystals can move as a liquid, they tend to stay ordered in the same direction, similar to a crystal.

In normal liquid crystals, the molecules can’t self-propel. But the system UC Merced physics Professor Daniel Beller and his colleagues studied replaces the passive molecules with tiny bundles of microtubules, each with the ability to consume fuel and propel itself.

The research goal was to study how those active elements affect the system’s order.

“These microtubules tend to align, but also continually destroy their own aligning order with their movement,” said Beller, a co-author of the new paper. “So there are collective motions that create defects in the alignment, and that’s what we study here.”

Active nematic behavior has recently been observed in the collective motions of bacterial colonies, cellular layers, components within cells and collections of vibrated rod-shaped particles. However, those studies were confined to two-dimensional materials.

For this study — supported by the Department of Energy, the National Science Foundation, the Army Research Office and the National Institutes of Health — the researchers created and examined a 3D active nematic for the first time.

The researchers studied the structures using topology, a branch of math concerned with how things deform without breaking. They found that the dominant topological structures in the system were loop structures that emerge spontaneously, expand and then self-annihilate.

Beller, in the Department of Physics in the School of Natural Science, worked with Brown University researchers as well as colleagues from Brandeis University, UC Santa Barbara, the Max Planck Institute for Dynamics and Self-Organization, Eindhoven University of Technology and the University of Chicago.

This kind of work had been done in two-dimensional systems, but this is the first time a 3D system has been studied this way.

Active nematics could be the basis for new technologies capable of autonomously moving, self-healing, mixing or sensing. But they must be stable as bulk materials. The new study identifies a pathway to such stability.

The researchers hope this new understanding of the system dynamics will be applicable in systems such as bacterial colonies or structures and systems in the human body.

“What we found here is a quite general set of behaviors that we think will be fully present in similar systems that have this tendency to align, but that are also turning stored energy into motion,” Beller said.