Skip to content Skip to navigation
Resources and Information on COVID-19 Ask a Question
UNIVERSITY OF CALIFORNIA, MERCED 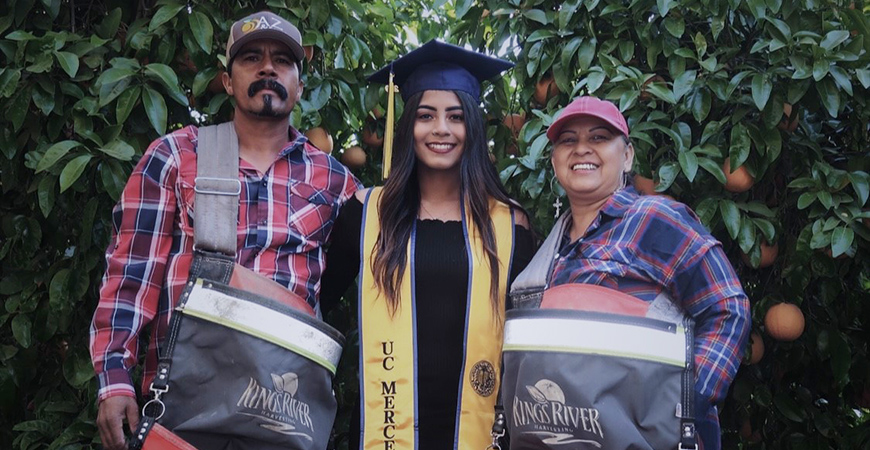 Anna Ocegueda poses for a photo with her parents in the orange groves where they've picked fruit for 25 years. She is the first in her family to graduate from a four-year university.

When Anna Ocegueda walks across the stage at UC Merced’s 2019 commencement, it will be not only a powerful moment for her, but for her family, too — and for the thousands of people who identify with her story.

Ocegueda is the daughter of migrant farm workers from Mexico and as one of five children, is the first in her family to graduate from a four-year university. This weekend, she receives her bachelor’s degree in psychology and a minor in Spanish.

Ocegueda is from Orange Cove, a small town in Fresno County, where her parents have picked seasonal fruit for more than 25 years.

Educational resources were scarce growing up, but Ocegueda didn’t stop striving. She took advanced placement classes in high school and had her heart set on the UC. Merced offered her the quality education she wanted and kept her close to home.

“I’m really family oriented and I’m from a really small town, so coming to UC Merced and Merced in general was a change. I wasn’t used to so much diversity,” said Ocegueda. “That’s something big because it was hard for me to leave home, but I knew it would open me up to these kinds of things.”

After graduation, Ocegueda heads to the Bay Area where she aims to work with children.

That work will have impact, but her final project for a Global Arts Studies Program course is resonating right now with people on and off campus and has earned her quite a bit of recognition.

Ocegueda’s sister photographed her with her parents, standing in the orange groves her parents know so well. Ocegueda is wearing her graduation robes and is flanked by her parents in their work garb, including the large bags they carry to collect fruit. The contrast is striking.

“I did this to inspire people and let them know that regardless of your hardships growing up, you can still do it,” said Ocegueda.

She posted the photo online and as of May 14, had received nearly 16,000 likes and 4,000 retweets on Twitter. Ocegueda said she has received messages from others who saw themselves in her story.

“I think it touched home for a lot of people.” Ocegueda said. “They felt moved by it."